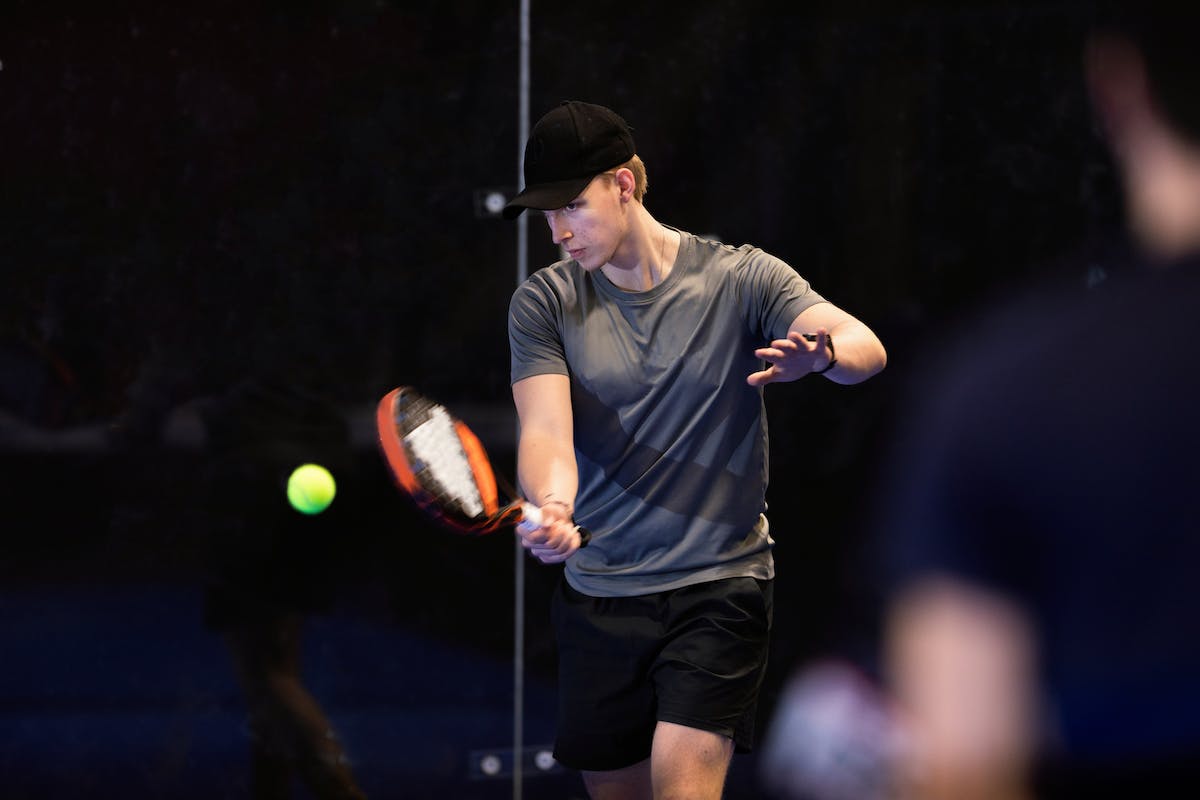 How to hit the 5 most important shots in padel

Have you also heard that padel is an easy sport? It's indeed easy to get started and have a good game with the sport compared to other racket sports. But the more you play, the more you hear Spanish terms like bandeja, bajada, and globo. Here are tips on how to hit the most basic shots in padel.

The point of the serve in padel is to start taking the net as soon as possible after the serve, thus gaining an advantage by starting the play in an offensive position where you can put pressure on the opponents who are forced back into the court.

You start with your arm stretched at shoulder height, to drop the ball on the floor. Bring the racket up, so you are prepared to hit the ball at waist height.

It's important to be moving forward to the net where your partner is positioned after your serve. Bonus is to slice the ball in order to keep the ball as low as possible for your opponent.

For many, it's one of the most essential strokes in padel. When the world's all-time best padel player, Fernando Belasteguin, is asked, the answer is always obvious: the lob.

Defensive play in padel is incredibly important, and the most defensive stroke you'll often use is at your own backglass and when your opponents have taken over the net.

In padel, it's all about taking the net and "owning" the net. That's when you have the advantage over your opponents in the points. That's why it's so important to go forward on the net directly on your serve.

This kind of stroke will help you prepare for a counterattack in your defensive play and take the position on the net and put pressure on your opponents and the point.

The lob is most useful when you drop the ball into your own back glass after a low volley by your opponents. From there, you as a player are under pressure and need to use the lob to both give you time to position yourself correctly for the next stroke and to be able to get to the net if your players drop your lob into their own back glass.

The most important things to remember about the lob are to open up your body, so your chest is aligned with the side glass, prepare early (always important in padel), bend your knees, and stay flexible throughout the stroke. Avoid using too much wrist or arm movement.

Many of you have heard the Spanish term bandeja. It is perhaps the word most commonly used in connection with padel strokes. But what is it? Many people think bandeja is an offensive stroke, and it has been. But as padel has changed, the stroke has increasingly become a defensive stroke.

In general, it is difficult to say whether the battle is offensive or defensive. It is an intermediate stroke between offensive and defensive. It's challenging to execute but will allow you to continue your attack on the net. It's very useful and obligates your opponents to defend and go back.

It's used when you who have control of the network get a good lob at you. Instead of dropping the ball behind you (and letting your opponents take the net), you hit a bandeja, a loose stroke over your head to buy time for you and your partner to reposition yourself in front of the net and thus take control of the play.

But how do you do it technically? Again, your preparation is essential. As soon as you see your opponent hitting a lob, immediately turn and start preparing for the stroke. It is important to start moving back straight away. The contact with the ball must be in front of you, The contact in front means that your strike can go properly through the ball (with slice).

Turn sideways as soon as the ball is approaching. Take a few fast steps back. Take your racket back early above your head (preparation). Make sure your chest is facing sideways and both your arms are up. Set the base for your feet as your shoulders rotate when hitting the ball. Hit the ball in the middle of your racket at forehead height.

The volley is one of the most important strokes of the paddle and a stroke you hit very often during a match. Therefore, it is important to master it well.

A volley can make the difference between a winner or keeping the ball alive or losing it. There are many things to consider when playing a volley and it is quite a complicated stroke to master well.

The starting position at the volley is close to the net, with the racket in front of your body.

The first step in your preparation is to pull the racket back and make your shoulders follow the movement. After that, if you're hitting a forehand volley and you're right-handed, move forward with your left foot. If you're hitting a backhand volley, your right foot should go forward instead. This will give you more control and power in your stroke. It is important that the ball is hit in front of you and make sure that your movement with your shoulders follows the whole movement and pushes forward.

It is important not to have too much movement in your volley, your swing should not be too big. As you don't have that time in front of the net often, as well as the risk of mistakes is increased.

This is the most powerful and attacking stroke in padel. It will give you the opportunity to finish with a winner. It should be used sparingly though, a bad smash will allow your opponents the chance to counterattack using their back wall.

The padel smash is also the stroke with the most amount of errors because a lot of beginners or tennis players tend to hit the ball as hard as possible.

It is important that you use this stroke at the right time and when you are in an offensive position, the opponents are under pressure and you are in a position to win the points.

You always want to hit the smash above your head with either a topspin smash by brushing the ball with your racket or hit it flat.

You want to hit the ball as flat as possible, this has three good reasons:

A flat smash is harder for your opponents to hit back. This has everything to do with the fact that the ball comes down on the smash by hitting the ball a bit more to the side of the body.

In a smash, it is important that you hit the ball high up on your racket and at the highest point where you can hit the ball. Preferably with the ball straight above you, possibly a little up against your left shoulder. This way you can get a slightly longer ball hit and in doing so cause the ball to topspin which causes the ball to stick upwards after it has touched the opponent's back glass.